Skip to content
The lectern at Little Gidding is one of a small number of survivors from the late Middle Ages and early Tudor period (up to the Reformation). There remain some 40 or 50 English mediaeval brass eagle lecterns, including the one at Little Gidding. Over half are in the east of the country (Norfolk, Suffolk, Essex, Lincolnshire, Cambridgeshire and Huntingdonshire), and Oman (1930) hypothesized an origin in this area, perhaps Norwich or Bury St Edmunds. Van der Meulen in 2018 indicated a preference for Flanders.

These lecterns were made from standard patterns carved in wood which were reused in various combinations. Typically there are a dozen or so components, including the body of the eagle, the wings, the talons, the globe, the various cylinders and mouldings of the pedestal, and the seated lions that act as the feet. These components can be assembled in different groups, for example different bodies with the same wings, or with different lions. By classifying the various styles of the components it is possible to group the lecterns into a number of families.

This page lists and illustrates some of the known examples. 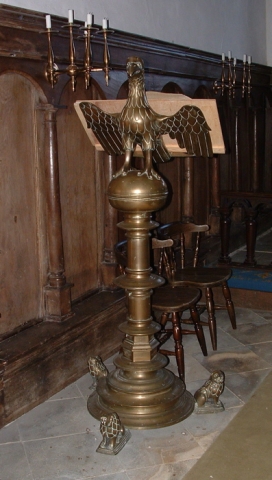 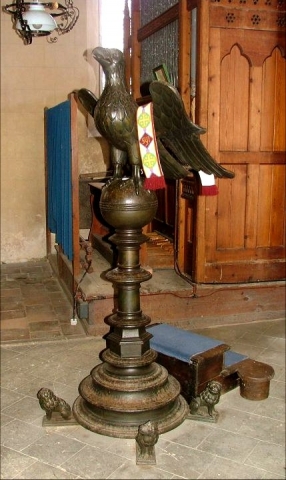 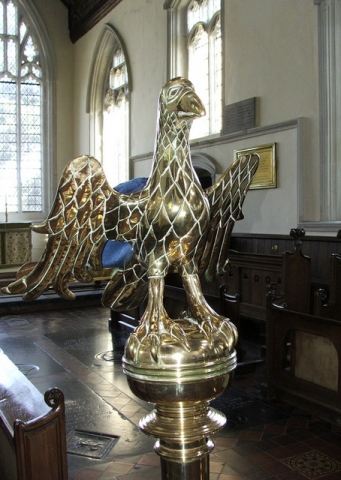 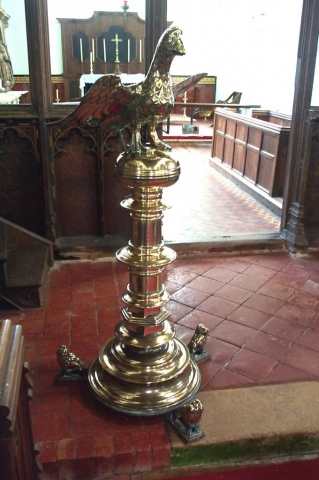 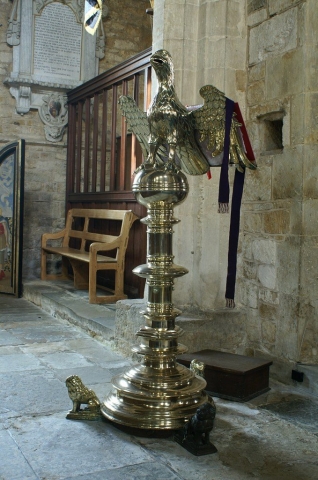 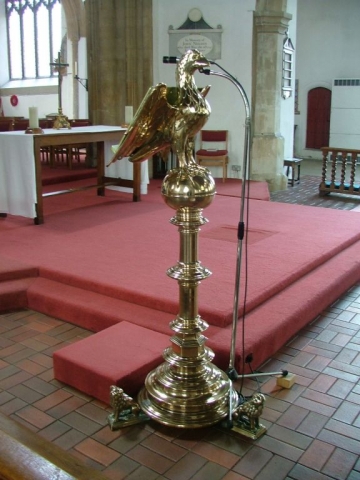 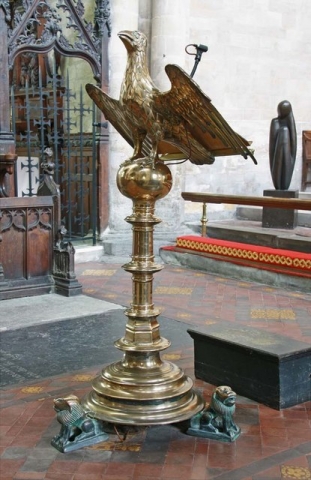 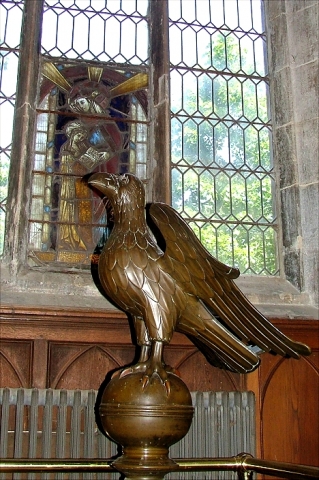 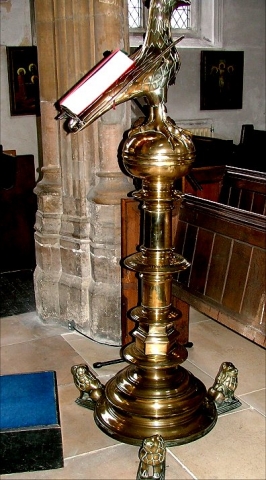 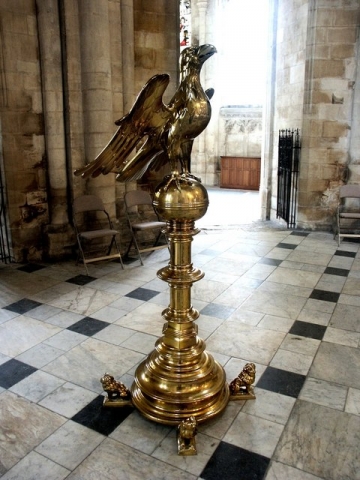 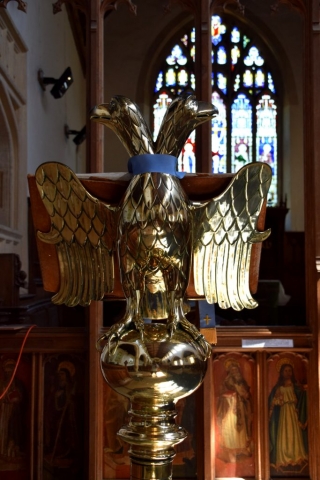 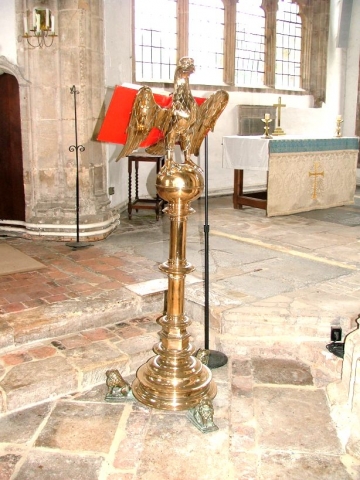 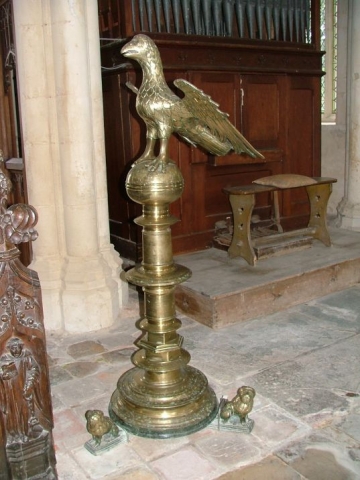 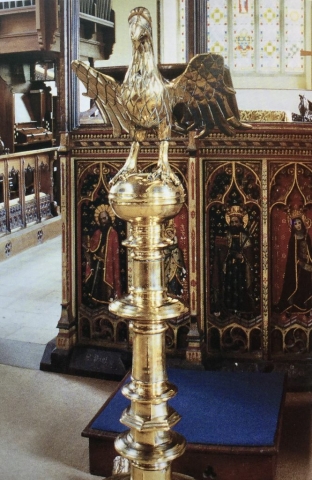 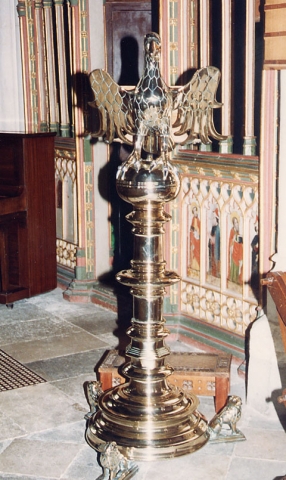 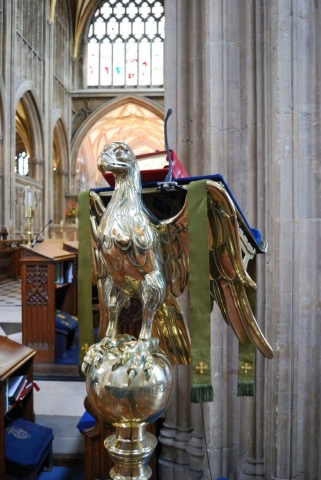 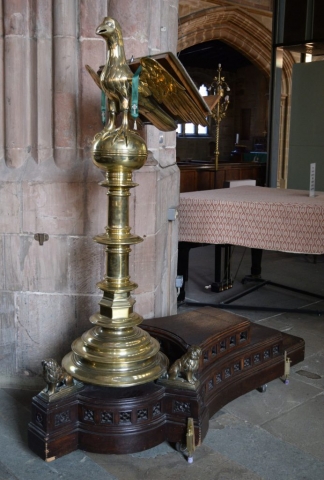 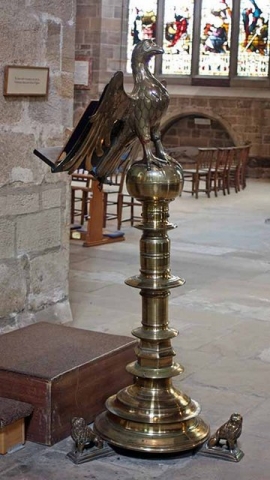 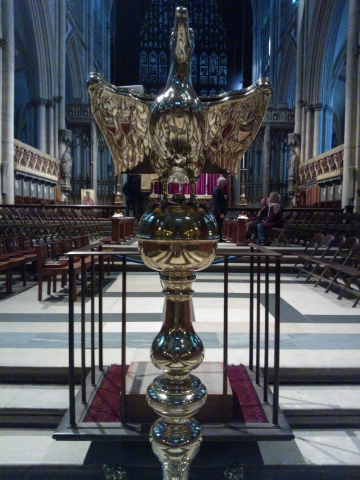 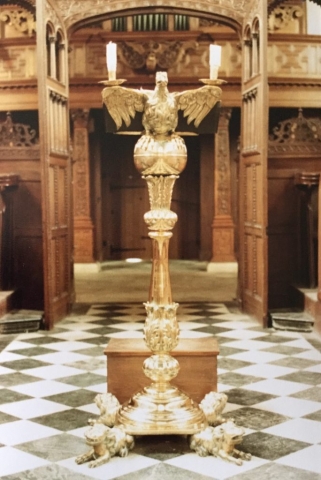 In his 1930 paper, Charles Oman (1901-82), who was Keeper of the Department of Metalwork at the Victoria and Albert Museum, classified the mediaeval brass lecterns known to him according to the styles of the different components, dividing them into four “series”, I, II, III and IV, with Series III being subdivided into five groups, according to the body shape. Group V of Series III, and the sole lectern in Series IV are desk lecterns rather than Eagle lecterns, so are not further considered here. In his 1931 paper he adds a further 13 post-Reformation examples. Van der Meulen (2017) lists 53 brass eagle lecterns, ignoring those outside England, and the non-eagle ones, and continuing after the Reformation up to 1731, after which newer brassfounding techniques and mass-production were introduced. The list below follows Oman’s order, with his numbers prefixed by the letter C, and with Van der Meulen’s numbers in square brackets against Oman’s list, prefixed by the letter M.

In his subsequent paper in 1931, Oman listed the brass lecterns of the 17th and 18th centuries, leaving them unnumbered and, except in the text, ungrouped. These lecterns were made in England, using the same techniques as the earlier ones, but with different patterns. The grouping is here inferred from Oman’s text, with the C-numbers continued in sequence from the 1930 paper. For these lecterns the date of manufacture and very often the founder is known, and they are ordered by date, except for Brasenose College (which though dated the latest is grouped with Bristol Cathedral and York Minster).