Skip to content
The Lectern at Little Gidding was purchased by the Ferrars in 1625. Major conservation work was carried out in 2019 and it now appears in all its glory. 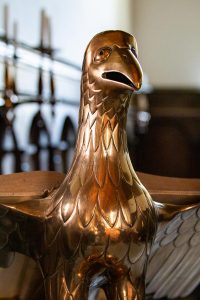 The lectern is made of brass in the form of an eagle standing on a globe at the top of a pedestal which in turn is supported by three small lions. It was very probably made in the early Tudor period for an unknown church and is of a pattern found in a number of churches in the east of England and elsewhere in the country. In his seminal paper Medieval Brass Lecterns in England Charles Oman noted that it was

[p]resented to the church in 1625 by Nicholas Ferrar who described it in a manuscript as ‘a pillar and eagle of brass for the Bible.’ Its previous history is unknown, but can it have been the eagle lectern mentioned in the dissolution inventory of the neighbouring Sawtry Priory?

Only some 40 or so English mediaeval or early Tudor brass eagle lecterns survive, including the one at Little Gidding. For further information, see this page with examples of some of the others and links to related articles.