Skip to content
The church at Little Gidding contains four stained glass heraldic windows. These were inserted during the restoration carried out in 1854 by William Hopkinson who had then recently become the Lord of the Manor.

The windows show, with varying degrees of accuracy, the coats of arms of four people associated with the story of Little Gidding: King Charles I; Nicholas Ferrar; John Williams, Bishop of Lincoln, and subsequently Archbishop of York; and William Hopkinson himself.

Click on each of the windows for more information. 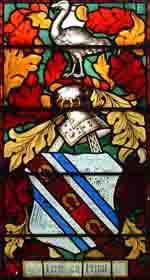