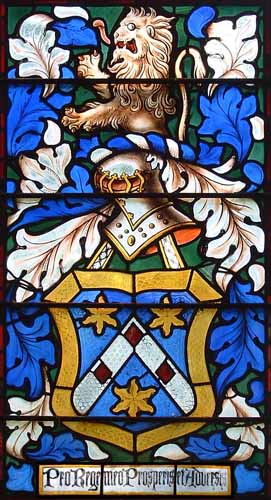 William Hopkinson was a solicitor from Stamford who bought the manor of Little Gidding and restored the buildings in the nineteenth century. The restoration work included the insertion of the four armorial windows.

Azure betwen three estoiles Or on a chevron argent three lozenges gules, all within a bordure also Or.

On a helm with a wreath of the colours argent and azure, a demi-lion sable, armed and langued gules.

The motto might be translated as ‘For my king in prosperity and adversity’ – an appropriate motto to stand in a window next to the Arms of King Charles I, perhaps.

The colour of the demi-lion crest is black, with red tongue and claws. (The amount of light shining through when this picture was taken makes it look a rather different colour.)

The helmet shown is of a style normally used for a peer; a gentleman’s helmet does not have gold bars. (This error is also made in the window showing the Ferrar coat of arms.)

Burke’s General Armory has the following entries for Hopkinson.

Hopkinson (Bonsol, co. Derby)
Az. on a chev. ar. betw. three estoiles or, as many lozenges gu. a bordure of the third.